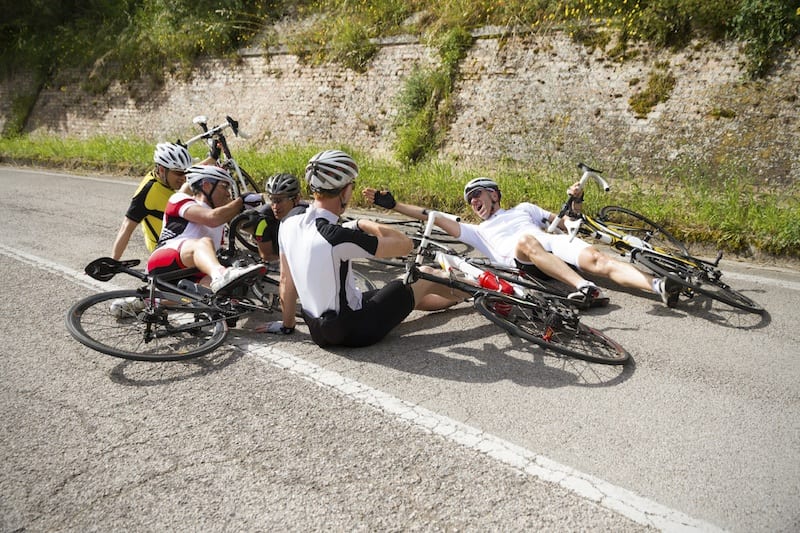 Many cyclists are growing concerned about race day accidents and the ever so important question of: “Who picks up the tab if you crash in a bike race?” Unfortunately, race day accidents are quite common. With the sheer volume of cyclists and the competitive nature of a race there are many opportunities for bicycle crashes and accidents on race day. There are also many types of bicycle race accidents. There can be bike vs bike, bike vs street defect, bike vs car, bike vs spectator, and more.

Each scenario is a different set of legalities and liabilities. Each accident is unique and should be discussed with a qualified and experienced bicycle accident lawyer. Lets explore some of the common scenarios together so you know how to better prepare prior to your next bicycle race.

Bicycle vs. Bicycle – Cyclist vs. Cyclist

Clearly the most common accident we face as competitive cyclists on race day is the bike wreck we encounter when another cyclist crashes into us. This can happen for so many reasons when drafting, or group riding, or sprinting in a peloton. Sometimes a neighboring cyclist is simply overly competitive and engages in handlebar knocking, or worse flat out hand to hand combat! Sometimes a neighboring cyclist simply isn’t paying attention and swerves too quickly to avoid other cyclists, a car, dangerous debris, etc.

Whatever the case, you always have the right to file a lawsuit against your fellow cyclist. This is usually the worst thing you can do. Typically your fellow cyclists don’t have any liability insurance which covers them if they cause a bicycle accident while riding their own bicycle. Lets not forget the huge issue of how rude it can potentially be to actually file a lawsuit against your fellow cyclist. What you were riding in a group with your friends? Are you really going to file a suit against them? I guess if your friend reached out and punched you in the face causing you to wreck your bicycle in your race I would consider filing suit as well! The better question to ask is whether or not there is “Event Insurance” purchased by the host of the race you are participating in. If a cyclist crashes into you because he/she was avoiding some danger under the control of the bicycle race (i.e. interfering race official, professional photographer, improperly managed aid stations, improperly marked turns on the course, improperly managed intersections or traffic control, and much more) then the event may be negligent and will most likely have an insurance policy which you may need to file a claim against.

Filing a claim against the Event Host’s insurance is tricky and you will want to ensure that a report is filed the day of your accident by the police, and the event staff. Make sure you assemble your witnesses prior to leaving the scene if at all possible. These claims may come with some strings attached, and will be difficult to bring, but they are often the only hope for race day bicycle accident victims.

Another often missed opportunity is for cyclists to purchase and carry their own Cycling Insurance policy. These policies will cover any accidental liability you cause, will also cover medical bills you encounter from an accident not of your own fault, and will often come with bicycle replacement plans and even rental bikes until your new bike can be purchased. These insurance policies are getting more and more popular amongst competitive cyclists and provide for a sense of security while competing in a cycling race. A quick Google search will lead you to several companies underwriting such policies. Some will even write you a policy for just the race event itself, others will write a policy for the entire year of cycling. I highly recommend taking advantage of one of these policies.

On race day we may encounter a street defect that can cause a major pile up when cruising at high speeds in a peloton. As is the case with event insurance claims you can explore whether or not the race host can be held liable for not knowing about the street defect; or worse – for knowing about it and not doing anything about it. There could be other potential theories of liability against the race host as well which are worth exploring with an experienced bicycle accident lawyer.

Another real scenario we can’t overlook is the possibility that the city, state, or county entity responsible for maintaining the roads used for the bicycle race are at fault for improper maintenance of the roadways. Sometimes seams in the roadway go unfixed for years until a cyclist gets injured and then the city, state, or county rushes in to fix it. Other street defects can include potholes, embedded objects in the surface of the roadway, and improperly designed roadways.

Your recourse here will be a lawsuit against the city, state, or county entity responsible for the defect. This suit may also include naming the event host as a defendant as well. Of course these lawsuits may be challenging to bring and will likely require the experience of a bicycle accident attorney. Finally, your own Cyclist Insurance can be very helpful here as well.

One of the unanticipated bicycle accidents we see on race day is the third party spectator out cheering the cyclists on, or standing there sanctioned by the event host to snap race day photos of you speeding by on your bike. Whatever the case may be on the pedestrian vs. race day bicycle accident, looking for the race host and their liability is yet again a good place to start. Potentially the host is liable for not securing the proper barriers preventing the spectators from interfering with the cyclists during the race. Alternatively, the event host may be liable for sanctioning a photographer who is dangerously too close to the cyclist.

The spectator themselves could be held liable for negligently causing the race event bicycle accident and you would have the right to file a law suit against them as well. Doing so may only be a good idea if there are assets held by the spectator sufficient to pay out on your medical bills. This is rarely the case as the average American is in heavy debt and does not have much in liquid assets. Taking a look at this avenue of recovery is still a good idea to rule it out or confirm it as a viable recovery option.

The obvious accident that occurs often is the cyclist on race day getting hit by a motorist. This happens all of the time. A distracted driver crossing the marked race day lane lines or cones and hitting a cyclist, or the motorist cruising through an intersection and hitting a race participant. Of course, there is the possibility of a cyclist colliding with a car for numerous other reasons as well.

The driver will be at fault for failing to see and yield to you as the cyclist. Their own insurance (if they have it – or have enough of it) should cover your damages when properly represented by an experienced bicycle accident attorney. Because you were hit by a car in this scenario, your own automobile insurance policy can potentially cover your accident so long as you have Uninsured Motorist and Under Insured Motorist coverage on your auto policy. Again, these claims may be difficult to bring and consulting with us is a good idea.

If you, or someone you know were injured during a hosted race or event and suffered a bicycle accident, hire a personal injury attorney who is experienced and has a successful track record with bicycle litigation. Ben Dodge, a licensed bicycle accident lawyer in Arizona, has dedicated his entire firm to one purpose: representing cyclists. Bicycle accident cases are the only cases Bike Accident Attorneys, PLC handles.

Ben Dodge has represented and assisted bicycle accident victims across the entire United States. As an avid and competitive cyclist himself, Mr. Dodge currently participates in national and local cycling events all over the country. It isn’t uncommon to spot him in early morning hours out riding his bike. The day he fell in love with his job was the day he devoted himself completely to bicycle accident cases.

You can call Arizona bicycle lawyer Ben Dodge of Bike Accident Attorneys, PLC at 1.855.663.3922 (855.ONE.EZ.CALL). Mr. Dodge’s staff is standing and ready to accept your call 24 hours a day, 7 days a week, every single day of the year. Mr. Dodge will personally return your call within 24 hours. There is never an obligation for a complimentary consultation with Mr. Dodge. His passion is in representing cyclists and his entire office stands ready to serve with kindness and patience.

Mr. Dodge can also be reached by email at ben@bikeaccidentattorneys.com

His Main Offices are located at: